Today's goal was to create an actual background for my "Soldier-Girl" character to live within. I'm using Photoshop CS3 as my medium.

As with much of my work, I take the traditional hand-drawn sketch and scan it into my computer. 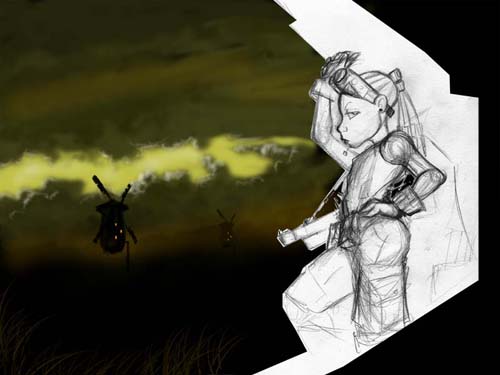 I wanted two key elements in this work:

1. One was the inclusion of clouds, because I'm always fascinated with their beauty. If you ever are curious about the existanced of God, just look up at His clouds.

2. The second element that I wanted to include was something that would give the viewer a sense of mystery. Something common, but viewed in an uncommon way. That's why I added the floating windmills, something common and generally tame but presented here in a weird fashion.

I was very displeased with my first draft of the sky, mostly because the color was so dark.

On the flip side, however, I was satisfied with the introduction of the "floating windmills" to the scene. I felt that they were going to be a great asset in communicating the feeling of mystery as planned.

Tomorrow I'll show you the color direction we decided to go with.